NAH, THAT COULDN’T HAPPEN TO ME

Scammers are people too 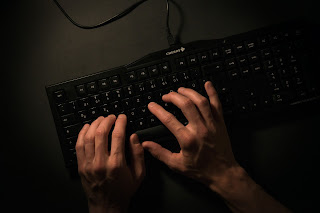 Amid searching for work online, an email finds its way to the inbox. Since it’s been weeks since the quest got underway, the message blends with the others seamlessly.

The opening of missives rolls on and, inevitably, unbeknownst to the opener, the nefarious note makes itself known. By innocently clicking on the offending offering a Pandora’s box will be unleashed if executed upon.

Information in it reads like a positive pronouncement of the reception of an inquiry of the application for employment. Human Resources has received the solicitation, along with the resume, and has ascertained that the applicant has met the basic requirement to move forward in the process!

As they peruse the details of the offer, a swell of gratitude fills the job seeker. All the aspects of the overture check the required boxes. Remote location, adequate compensation and benefits that are requisite upon examination.

They conducted the initial interview online.
A chat between the candidate and a hiring manager that went as well as a conversation could have. The general questions covered the usual topics.

There was nothing out of the ordinary, except that none of the queries touched upon the specific department that the applicant applied for.

The applicant mentally chalked that particular point would be sussed out in the subsequent conversation.

A few hours later, another email arrived stating that the interviewee was accepted and elected to move forward. Elation abounded!

Next, there would be a phone call from the team leader. They instructed the selected aspirant to keep the cellular apparatus close and the line open. The ring could happen anytime.

On the next afternoon, the phone rang. It was from an area code not associated with the location of the company, as shown on the website online. The call came in, and they exchanged pleasantries.

Then came the first question.
It made little sense. Why would they ask about customer service? This tripped all kinds of system triggers. There was treachery afoot!

Not wanting to blow the opportunity because of unfounded suspicion, the applicant made a note to do so after the current conference. It was a peculiar exchange, but after some more of the old back and forth, the team leader announced that the spoken to was now a fully fledged team member.

Upon the conclusion of the examination, the now supposedly fledgling worker searched the names of the company representatives’ profiles on the reputable online database website. They checked out. They had substantial and renowned resumes.

Those facts relit and sustained the flame. It set the meter to onward and upward. As promised by the new squad chief, a confirmation missive with an offer letter and request for banking information to facilitate direct deposit followed directly.

When they arrived, all documents were filled out and returned forthwith.
It was then stated that new equipment would be needed to do the job as appointed. The company would sponsor these supplies. There would be no out-of-pocket expense directed to the hiree by the hirer.

Only that there is a problem with the payroll system. Instead of depositing the funds directly into the new employee’s bank account, they would send a check via email. The graven image of the check will be scanned via cell phone application and deposited.

Once that was complete, an image of the deposit slip was to be sent back to the email address of the supposed team leader. The new equipment would then be invoiced and shipped to the new team member in time for orientation and training.

They sent a message with the check image attached. It was from a checking account of a small public entity in a state thousands of miles away. Needless to say, it was fraud all the way.

A report was filed with the FBI after the banks were notified. The local police recommended filing a complaint with the Federal Trade Commission, which was completed promptly after the discussion.

Hope can generate a strong desire. Strong enough to blind the mind and silence discretion. It can happen despite warning signs and experience. If it sounds too good to be true, it is.
Photo by Stefan Heinemann on Unsplash