Showing posts from November, 2021
Show all

This just in: JFK is still dead

November 28, 2021
Of course, just when you think this society we have here in the United States couldn’t get any weirder, along comes a group that gathered in Dallas waiting for JFK Jr.. They’re followers of QAnon. A once upon a time fringe group that is no longer fringe. Some of it’s adherents almost seem downright lucid, except when they profess what they believe.  Now, don’t get me wrong. We’ve had our share of many well meaning weirdos before. Flat Earthers, Mayan calendar end of days believers, Y2K devotees, Apollo 11 moon landing deniers, Mormons and so on.  But, among QAnon beliefs, of which there are many , is the John F. Kennedy Jr. is going to emerge and proclaim that Donald Trump is still the President of the United States, and that he, JFK Jr., is now the Vice President. Together, QAnon supporters believe Trump and Kennedy Jr. will clean up the degenerates in Washington D.C. that stole the 2020 presidential election, amongst other charges .  They’ve been camped out in Dallas since this summ
Post a Comment
Read more 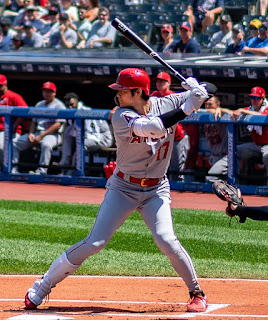 When Shohei Ohtani chose the Los Angeles Angels, it was like the baseball gods finally gave the ball club's fans a break. Not since the Angels lost out on Mark Teixeira and got the rights to draft Mike Trout as fortune shone on Angel Stadium.  Drafting Trout was a fluke of the rules. Shohei Ohtani choosing the Angels was a miracle. He did it because the club told him he could pitch and be a position player. That ruled out National League teams. Ohtani wanted to be a Dodger. But they weren’t prepared to let him do it.  In his first season, Shohei Ohtani became the first Major League Baseball player to make 10 starts as a pitcher and hit 20 home runs as a position player since Babe Ruth accomplished the feat in 1919. The Babe was not a two-way baseball player after that. His diet didn’t allow it. Shohei Ohtani was just getting started.  He has always been a meticulous conditioning zealot. As a youth in his native Japan, Ohtani became relentless and worked out hard. When drafted
Post a Comment
Read more

NFL: The Arizona Cardinals Are For Real 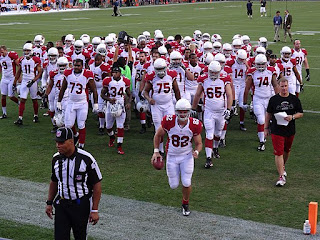 For the first time since 1947, the NFL Cardinals franchise has an actual chance to win the league championship. To say it has been a long time is an understatement. Jackie Robinson was a rookie for the Brooklyn Dodgers the last time the Cardinals won a title. It was so long ago, the team was in Chicago. They were the Chicago Cardinals! That comes as a shock to most Chicago Bears . Joe Louis was heavyweight champion of the world. A horse named Jet Pilot won the Kentucky Derby. That sounds like a fast horse. Israel wasn't a country yet. The Cardinals made a Super Bowl in 2009. The club was lead by Kurt Warner and Larry Fitzgerald. They almost won, but were beat by the Pittsburgh Steelers on a last minute impossible pass by Ben Roethlisberger to Santonio Holmes for an equally impossible catch. Warner had one last chance but his luck finally ran out. Being out of luck is a normal state of being for the Cardinals. The team is actually the first professional American football team. T
Post a Comment
Read more
More posts