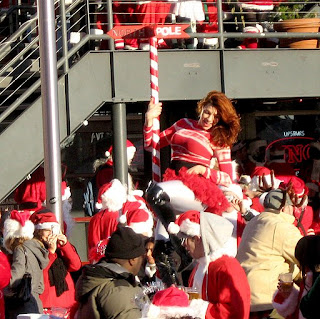 It was early morning when the janitor crew made it to the snowbank from Moose Creek. There he had to clean up after the previous nights festivities.

“This is the dumbest place to have a pole dancing festival thing. Whoever thought of this has a screw loose.”

The idea came from 22-year-old Roman Bombardo of Fairfield, New Jersey. One night, Roman and a couple of his friends were in a local strip club when he had an idea.

“I was thinking ‘Where would be the place that would have the best place to have a pole dancing bar?’ The most unique location possible. They already have them on islands and in cities and stuff. Where would be a place we could promote? My buddy Pate said Poland. I thought, nah, that’s too big. Then it hit me. The North Pole! I bet nobody thought of that before!”

That set the wheels in motion.

The plan to fund his new project was simple. Roman had just gotten a multi-million dollar inheritance coupled with a settlement from an insurance claim.

“Something happened to my uncle. I got left some money after he met with a tragic accident. Then the insurance from the accident also paid off. I don’t know anything about it. What a coincidence, though.”

Roman Bombardo took his windfall and applied it to his vision, sight unseen. He hit the internet and built a network of contractors to make his dream come true.

“I don’t know what the hell he was up to. The only thing I knew was that his money was green. If he wanted to throw a party at the North Pole and was gonna pay me in full, then who the hell was I to ask questions?” said one contractor.

A few night later, it dawned on the future promoters that they should venture to the North Pole to check it out. Once Roman Bombardo and his crew arrived to find it covered in snow, it made his dream a bit more expensive.

“All the snow did was make me think about getting snow mobiles and maybe a sled. We could have like a winter sports thing with snowboarder competition and things like that.”

There were members of his extended family and family associates that would help in securing alcohol and food services. They would also provide cover for permits and any issues with law enforcement. Sanitation disposal was also provided for seeing as it was the Bombardo family business.

As the cost overruns mounted, the newly christened Bomb Events Inc. decided that the promotion of the festival had to start immediately. Roman had the idea that the ticket sales would pay for any shortfalls in financing. He had to find a celebrity influencer to help spread the word.

One of his family’s associates knew a professional wrestling promoter that had connections in the industry. He enlisted wrestling legends Haystack Kozinski and Fernando ‘El Gigante’ Rodrigo to post on social media about the happening.

Then it was time to find performers. It was impossible to find dancers in New Jersey willing to fly to the North Pole without payment in full first. Bomb Events had to place ads in local Alaska media hoping to attract talent.

It looked like it would all be for nothing. Phones weren’t ringing. Social media sites were all but dead. The website getting spammed for no good reason. The North Pole festival was looking like a complete failure.

Until a miracle in miscommunication happened.

One of Haystack Kozinski’s posts had a typo that said ‘Bomb Event Festival’. It made it sound like the production would be a show consisting of high explosives. The post took off like wildfire.

A few of Haystack’s media savvy fans made it go viral. Calls and emails started pouring in to Roman Bombardo’s phone and computer.

All Roman knew was that there was money coming in. It didn’t matter if it was for something completely different. He could pay off his bills and begin construction on the site.

He told himself that he’ll figure out what to do on the fly. Roman Bombardo was convinced that he was a master when he didn’t think and worked on reflex.

If this crowd wanted bombs, he could figure out how to make it happen somehow. If he got a lot of money, he could pay for strippers and bombs and snowmobiles and maybe a tank and whatever else. It was going to be epic.

When construction began, they decided the venues would be open air.

There would be too many people to fit in one building. The air temperature would be around 45 degrees Fahrenheit on the days of the event. They brought it to Roman’s attention: the stripper pole might be too cold for the performers.

He came up with the idea of electrifying the pole to keep it warm. The electrician had some reservations, but since the site was unincorporated, there weren’t any regulations pertaining to heating stripper poles. The electrician was told that he was free to do whatever he thought would work. He then quit.

One of the lighting guys wasn’t a licensed electrician, but was sure he could do the job, so they promoted him on the spot. Regulations and licenses always seemed to hamper vision. Bomb Events Inc. wouldn’t have that problem.

Ticket sales went through the roof!

They estimated that attendance would be 50,000 plus!

When hotels and motels and local camping ground filled up, Roman faced a dilemma. Where would the crowd be housed? He thought people would bring tents or fend for themselves. But, with the entrance fee he charged, there were expectations that there would be accommodations.

He sent out email blasts to that point. Attendees were responsible for themselves if they planned on staying. Considering the remoteness of the North Pole's sight, that was a lot to ask.

But Roman would figure out something. He purchased rolls of canvas from local Army Surplus stores. They would at least have that if anyone had demands.

When the day arrived, festival goers arrived via skis, snowmobiles, 4-wheel drive vehicles and, in one case, a helicopter. They were cheering when the beer stands opened. Most were carrying rifles and handguns.

Militias from Idaho and Montana had made the trek. After speaking with Roman, they were appointed as event security.

When the electric pole warmer malfunctioned and lit the stage on fire and there were sightings of polar bears and wolves, that’s when Roman Bombardo and his friends jumped on snowmobiles and headed for the airport.